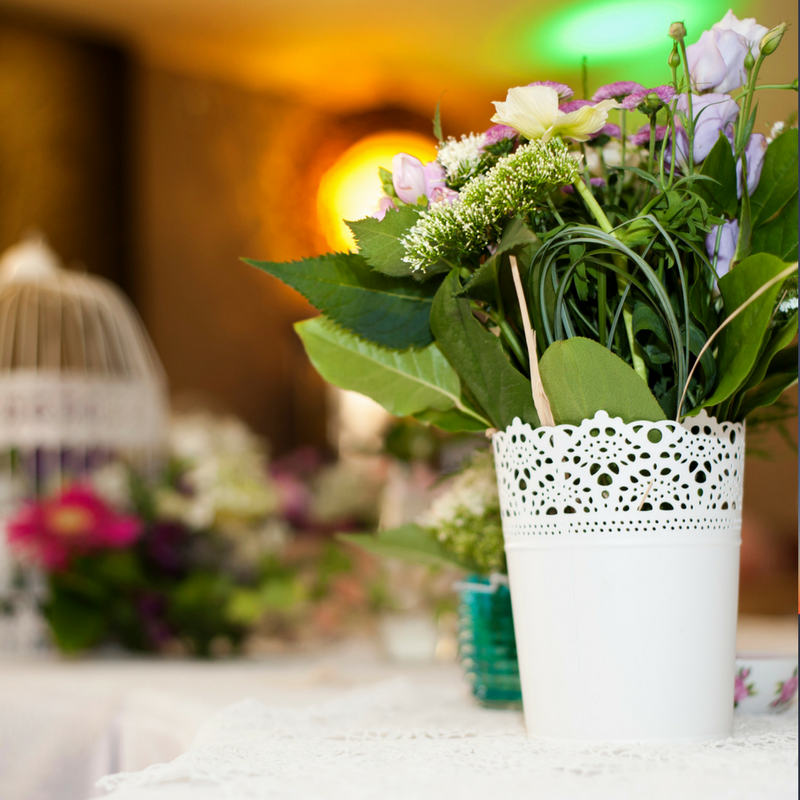 Decorating may not be the sing of a coup.

“Women are trying to take over churches,” the man glanced my way.

I shifted in my seat, hardly believing my ears. He said it after I introduced myself as a seminary student to the men gathered to plan a non-profit fundraiser. I contemplated ignoring the comment or telling him off. Neither reaction seemed a constructive means of winning friends and influencing the men in the room.

The earth swirled as—yet again—I wished a trap door would open and transport me to a universe where Christian men don’t act suspicious of Christian women.

Jesus, is this really happening? I prayed silently.

I didn’t want to sound mousy or snarky; heaven forbid getting labeled b**chy. Listening seemed right however much I felt like throwing something or calling out the inappropriate comment.

Reflecting on a conflict resolution course, it seemed best to invite a constructive dialog: “That’s interesting. Help me understand. Why do you think women are trying to take over churches?”

“It’s the decorating,” he responded flatly.

I nearly busted out laughing. Was he joking? I waited for him to laugh, but he didn’t.

God, this is the weirdest conversation I’ve ever had, I prayed. What to say?

The man expressed his distaste for the paint and curtains in his church. Evidently, mauve and floral didn’t appeal to his sensibilities. When I thought about it, they didn’t suit mine either though I’d never felt alienated by them. Contrary to popular stereotypes, it occurred to me that men care about decorating.

But I could not wrap my mind around equating mauve paint and floral curtains with a military coup. Surely none of the women in the man’s church had meant it that way.

I imagined a moose head hanging in a mauve narthex. Might that solve the problem? To some men I guessed it would. Then again, the male pastor of the church where I interned didn’t care for the deer head hanging in the community hall we rented each week. 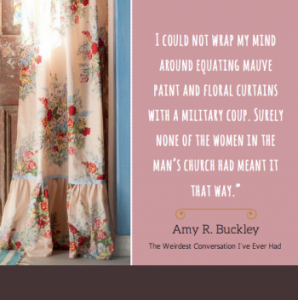 Evidently, his daughter had burst into tears when seeing the head of Rudolph’s slain relative mounted over a doorway. Satisfying “masculine” or “feminine” comfort zones didn’t appear to make everyone feel welcome in church.

Since I believe Jesus dislikes stereotypes, and values hospitality, it seemed right to validate the man’s concerns, “I think you’re right. Women usually decide upon the decorating, and it must be hard when that doesn’t appeal to your tastes.”

The man nodded, and it appeared some progress was made in my efforts at building gender reconciliation in Jesus’ name.

I considered relaying the story of the deer head and my pastor’s daughter but decided against it since it seemed to minimize his point of view. Instead, I made a suggestion that I thought would help him feel included. (The conflict resolution course had encouraged that.)

“Perhaps more men should get involved in decorating,“ I partly joked.

The man looked uncomfortable, and I doubted he would volunteer to help the women in his church change the decor. The conversation crashed to an end, and he changed the subject.

For a time, I analyzed and over analyzed the conversation. Had I said too much? Was it my fault the conversation had fallen into a ditch? Had my joke increased the divide between women and men in churches?

Jesus’ gentle spirit stopped my anxious thoughts. Knowing that I’m far from perfect, and I don’t always see results I long for, He is still King of kings and Lord of lords.

I’ve stopped thinking that God expects more than our genuine efforts to be at peace with others as we grow as women and men in Christ. Sometimes the way seems clear; sometimes we shoot in the dark. We don’t always know if we did or said the best things. None of us know the end of the stories that will come to fruition in eternity.

Until then, we do the best we can, granting mercy when needed, asking God’s spirit for grace to live in the best ways Jesus would have us live.

For we are God’s masterpiece. He has created us anew in Christ Jesus, so we can do the good things he planned for us long ago. (Eph. 2:10 NLT).