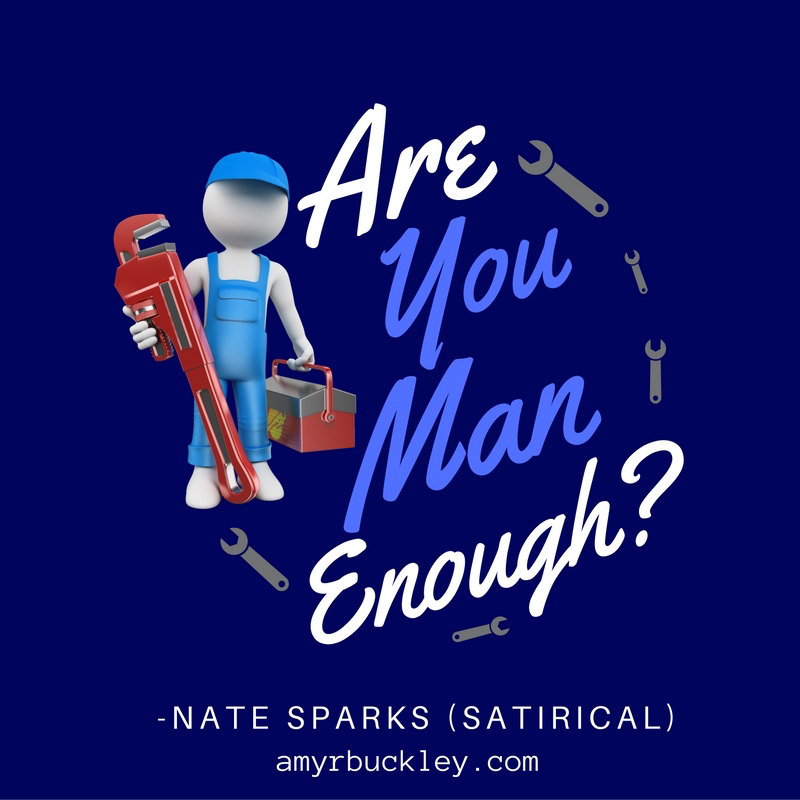 My last two posts offer a humorous look at questions and inconsistencies that women and men face when practicing strict gender roles. This week it honors me to post a satirical piece by Nate Sparks. He digs into common theological arguments for men to “man up.” When pushed to logical ends, we see painful limits many men face while working out what it means to live in Christ. Sadly, the outcome is less than ideal in marriage and family relationships. Thankfully, in Scripture, the dance of our Triune God (Creator, Word, Spirit) is not a chain-of-command; it is possible for unique individuals to live in interdependent oneness (more on this in an upcoming post).


There is a wealth of material available today, instructing Christian men how to achieve a godly masculinity. Church bookstores are full of materials on “biblical manhood.” Despite the wealth of resources available, the men of the Church simply cannot seem to figure it out. Our pews are full of sissy-boys and cowards. [1]

Since no one else seems able to stem the tide of “soft,” “weak” men being emasculated by the Feminist Agenda, it is apparent my opinion is what the Church is missing. Because I have years of experience leading and piloting men’s ministries, it is time I shared my vast wisdom with everyone else. I will outline below three critical things I am convinced every man in the Church MUST do to be a true man of God.

God has placed deep within her feminine heart knowledge that she is a delicate princess. She wants to be your damsel in distress. In all your masculine glory, you must guide her into her greatest dreams, marriage and motherhood. In return, she will grant you the greatest gift any man can receive: full submission to your every sexual desire.

I realize this sounds backwards, but that’s because you’ve been spiritually castrated.

Because of her God-given feminine heart, your wife doesn’t want equal partnership. She wants strong male leadership, to be reminded that separate and subordinate roles don’t diminish her value. If she doesn’t desire this, it’s because she’s rejected God’s design, rejected the only true femininity.

We all know most Bible translations and scholars treat subjugation of women as evil, a systemic injustice. But, thankfully, after 2000 years of confusion, the ESV has officially arrived at the only inerrant and immutable translation of Scripture. We owe this wonder to the patriarchal vision of one man.

We needed justification for treating our wives as lesser beings, and in response Wayne Grudem has arisen to quell the Feminist onslaught. Recognizing that the inspired word of God simply didn’t support a patriarchalist hermeneutic, Grudem took upon himself the mantle of reinterpreting the entire Bible.

If your wife begins arguing she needs more say in the household, hand her an ESV Women’s Study Bible and bask in her defeat. She’ll thank you for it later, as she realizes the call for men to model Christ in Ephesians 5 means Jesus is eternally subordinated to the Father, and thus she is ontologically subordinate to you. Not only does this establish your rightful place as dominant male leader in your household, it also puts her in her rightfully subordinate feminine role.

2. Train Up Your Children

If there’s one area where godly men need to take a stand against the Feminist Agenda, it’s in the arena of parenting. The reasons for this are simple.

Our culture tells girls they ought to be powerful, strong, self-reliant; but this is the work of Satan. Even the most powerful woman in the world knows deep down she is a delicate princess in an ivory tower needing a man to rescue her. When we empower our daughters, we give them false hope that they can grow up to be police officers or, God forbid, pastors. Such moral failure will bring about the fall of Western civilization.

Instead, we must remind the girls in our lives that they need strong male headship in order to protect them from the evils of the world. If someone should assault your wife while she is out alone with the kids, empowering her to defend herself and your children would prove futile. We all know women are weak and helpless. Thus, what your daughter needs is her father constantly controlling her, treating her like property. After all, the woman she grows up to be must bring glory to you as her father.

As the Apostle says in 1 Corinthians, “Women exist for the glory of men.”

However, don’t ever think allowing your wife to over-mother your son is acceptable. In the same way your overbearing presence will cultivate a godly femininity in your daughter – one your wife simply cannot impart by via firsthand experience of growing up female – allowing your wife too much influence in your son’s development will stunt his masculine development. You might as well castrate him, because strong feminine influence will make your son into a skinny-jean wearing, light beer drinking, peace-loving ninny.

Just as Jesus is depicted as slain lamb and mother hen in Scripture, your son must be a violent conqueror of his sphere of influence. He must prove his masculinity by getting in fistfights and risking severe brain damage playing football before his pre-frontal cortex has time to fully develop. God wants manly soldiers to rise up and take back our culture in exactly the same way Christ did when he refused to call a legion of angels, allowing himself to be crucified as a blasphemer and rebel by religious authorities and Roman Empire.

Just as Jesus chose to eschew tyranny, teaching his followers to “turn the other cheek” and “walk the extra mile,” we must teach our sons to defend the faith by policing borders and reminding all would-be challengers that theological certainty trumps the well-being of any person every time.

Further, we all know men are visual creatures, turning into rabid dogs at even the slightest hint of female skin. Your son will be no different; every v-neck sweater will send him into sexual overdrive. Thus, in order to avoid sexual temptation, you must teach him to do the only rational thing: assume headship over women by policing every curve of their bodies.

In doing so, he’ll not only protect his own heart, but also protect the females in his life from secular men, who only see them as pieces of meat. In doing this, he will take full responsibility for the lusts of his heart and ensure he remains pure for his wedding night.

We live in a society which systemically oppresses and devalues women. Ergo, if we neglect to teach our daughters that feminine freedom is found in full submission to men and our sons the freedom of men in headship, then we can never hope to be a Church which opposes and overcomes sexism and misogyny in our culture.

Just as God is ruler of all of creation, the husband is unquestionable ruler of his home.

This is made clear when we study the theology of Bruce Ware. Ware has shown that passages which say Jesus is equal to the Father, revealing his fullness, are evidence that Jesus is eternally subordinate to the Father. Thus, because the Christian family must model Trinity, women are ontologically and eternally subordinated to men. This theological truth is self-evident in Scripture, not a single author in the Bible wasted time discussing it.

The logical conclusion this doctrine is just as the Father sends the subordinated Son, the Father and Son send the Spirit, who must also, then, be eternally subordinate. In the Trinity inspired home, the Spirit is then represented by children. And, because all submission requires subordination, we see the members of Trinity are equal in substance, but two are subordinate in function. In the same way the wife and children then must obey their male head.

In light of this, discipline in the Christian home takes a particular shape. I advise 3 time-tested, biblically sound principles.

Looking at the cross, we realize God punishes every act of disobedience. In 2 Peter 3, Peter tells us God is patient, withholding wrath from those we think deserve immediate destruction. God’s patience with the wicked is rooted in his desire that none should perish and all repent. Likewise, in Psalm 103 we learn God is slow to anger, merciful, and abounding in love.

From these passages it is evident God punishes every act of disobedience immediately. God is perfect in his wrath. Just as he tolerated Moses’ challenging his authority by defending the Hebrews from utter destruction, and just as he patiently negotiated with Abraham over Sodom, God punishes all who question him. Since we’re called to model this perfection in our own lives, we must parent our children after his example.

God cannot abide any sin; thus our every act apart from Christ is an offense to his perfect holiness and authority as creator, thus God chose Jesus, his Son, to be killed in order to satisfy his righteous wrath. In murdering his own innocent son, God ensured everyone would realize how much they need to repent before he does the same thing to them.

Just as God rules us with fear, so we must instill fear of retribution in our children.

In Exodus, God used the plagues to break the defiant will of the Egyptian people in order to achieve the freedom of the Hebrew people. Through these ten acts of terror, God secured the legacy of Israel, which resulted in the birth of Jesus and salvation for all.

In the same way, a father must discipline his children until they cease to hold any will to defy him. If they resist, we must break that will through retributive corporal punishment. In doing this we prepare them to be adults, to curb their sinful desire with absolute submission to God and his divinely appointed human authorities.

Secular leftist “science” wants us to believe corporal punishment causes the same psychological and emotional effects as physical. However, we must remember God’s Word tells us sparing the rod will turn our children into evil adults.

Again, consider that God in his desire to show love to us, beat Christ to death – crucifying him in order to ensure we conform to his will. In this we see that physical violence perpetrated to save a person from their own sinful will is God’s definition of love.

Some will call such a God a monster, claiming this theology undermines notions of consent in relationships, making children vulnerable to abuse by robbing them of the ability to question authority. These are not true Christians. They hate the word of God and promote their own agenda of “social justice” apart from Scripture’s clear teaching.

Remember, our children are the future of the Church. If Christianity is to stand strong against the Feminist Agenda, our children must learn to embrace the sacredness of testosterone driven Christianity and pass it on to their children. If we fail our duty as fathers, our children will become godless feminists, egalitarians, and homosexuals. Without faithful men embracing the dominance and conquest of biblical manhood, all is lost.

Are you man enough?

[1] This post is purely satirical. It is my hope that, by this medium, people will rethink toxic theology and hermeneutics. For my work dismantling these toxic ideologies see here and here . . . 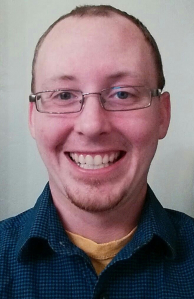 Nate Sparks is a stay-at-home dad with a Biblical Studies degree from Judson University. His passion for social justice and equality is poured into his work, as he often writes about the theological and practical issues surrounding church abuse. His blog, Sparking Conversation, can be found here. He can be followed on Twitter at the handle @NateSparks130 and Facebook at Nate Sparks.