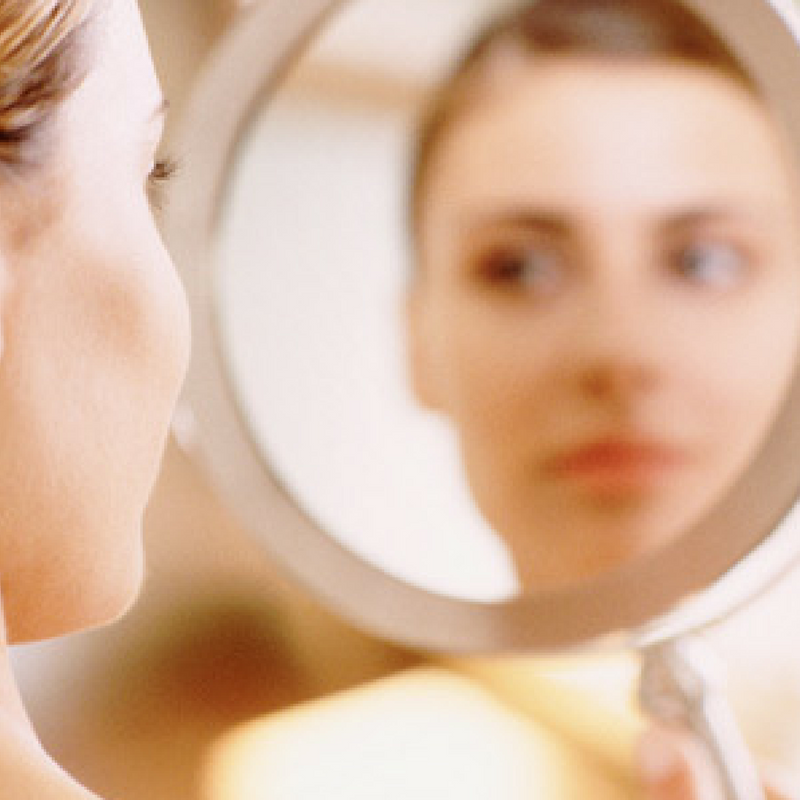 My daughter approached me with Barbie’s plastic head in one hand and her torso in the other.

Growing up, I’d learned to snap the head back on. It didn’t appear that my daughter’s Barbie would fare so well. The rim of the neck had cracked apart, rendering the swivel useless. Short of a neck brace, or miracle glue, Barbie would remain headless.

I felt a little relieved. It’s not that I relished the doll’s demise, but I had received Barbie into the household with reservations. I didn’t want to be silly or legalistic, but I worried each time Barbie smiled up at me from the carpeted floor. Would this toy leave my daughters with wrong impressions of femininity and body image? Or was I hyper-reacting?

Growing up, my own relationship with Barbie had been complicated.

I received Barbie for Christmas along with a starter wardrobe of practical daywear, elegant evening gowns, and the proper assortment of flats and heels. It was the late-seventies, and I had no idea that second wave feminists were questioning why Barbie’s super-sized head was as big as her ribcage and over-endowed chest. Her lovely wardrobe enchanted me although I quickly decided it was more interesting to build her a house with scraps from my father’s construction sites than to choose her couture. I labored passionately with nails and glue, making furnishings out of repurposed materials from around the house. As I worked, Barbie’s saccharine smile and fancy clothes seemed disconnected from my sweat. Did she disapprove of me? I could not imagine Barbie helping with work like this.

My interest in Barbie fizzled a year or so later, probably because my two best friends were boys. Exploring their parents’ forty-acre ranch introduced new wonders—catching crawfish with our bare hands, hunting for wild blackberries, building forts, and swinging on ropes over the river. I’m not sure what happened to Barbie, her extensive wardrobe, and her imaginary life in the house I built for her. I didn’t think about Barbie again until high school when I realized that she and I had some unresolved issues.

Like most teenaged girls, I read fashion magazines. I also danced on a drill team known for girls who looked more like Barbie than I did. I felt lucky to have blonde hair. But I felt unlucky when ten pounds crept onto my legs my sophomore year. Since I was tall, I weighed more than other girls. We used to have to weigh-in as a team. After hearing my numbers a shorter team member once commented, “Wow, I feel better!”

Her comment stuck. I became very interested in grapefruit, rice cakes, calorie counting, and exercising. After a few weeks, my enjoyment of food overpowered my longing to be ideal, and I resigned myself to feeling less-than-attractive.

As wiry hairs grow increasingly from my chin, toes, and neck, and my temples turn white (among other unmentionables after forty), I’m finding more perspective than I had in high school. I wish I hadn’t spent so much of my younger life dreaming about unattainable airbrushed standards of female attractiveness. I wish I had learned earlier not to be so vain. Truth be told, I still fall at times into comparing myself to actresses and models. I do not underestimate Barbie’s siren call—beckoning young girls to imaginary, unattainable standards of beauty. 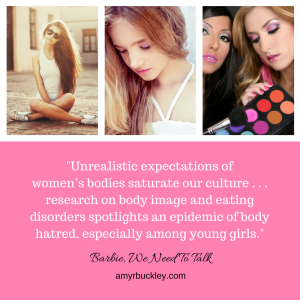 Heaven knows my instincts to protect my daughters from the struggles I faced in high school and early adulthood. My impulse has been to exile Barbie from our home. I’ve wanted to build walls around their playroom, shutting out harmful cultural forces. Yet I’ve reasoned that Barbie will continue smiling at us from movies, television, t-shirts, toothbrushes, foil balloons, and on and on.

I want to scream, “Barbie, you can’t have my daughters!”

Beyond reacting, I know that Barbie isn’t wholly to blame. Unrealistic expectations of women’s bodies saturate our culture. I worry for my daughters and their friends knowing that research on body image and eating disorders spotlights an epidemic of body hatred, especially among young girls.[1] Four out of five 10-year-olds say that they’re afraid of being fat. 42% of girls in first through third grade wish they were thinner. Half of girls aged nine or 10 claim that they feel better about themselves when they’re dieting.[2] These are the fruits of a media culture that prizes dangerously skinny, digitally altered bodies over those of real, healthy women.[3]

My husband and I decided to deal squarely with the challenges. Barbie would move in with us and serve as a teaching tool. Brushing aside my doubts, I went shopping. Barbie looked the same. Her wardrobe still consisted of elegant gowns and casual wear. Surveying the repertoire, it delighted me to learn that 21st century Barbie has more options. In addition to a wedding gown, she might need a lab coat, chaps, a space suit, or contractor’s hardhat! Barbie’s smile seemed less menacing. I looked forward to my daughters imagining a variety of situations and seasons in a woman’s life.

When Barbie’s head fell off, I set it next to her torso. My daughters and I discussed what real life would look like given her proportions. Did you know that Barbie would not be able to walk, run, rollerblade, or ice skate? And her tiny waist would be thinner than her head, leaving room for only half a liver and a few inches of intestine?[4]

“She would miss out on birthday cake!” my daughter observed.

“And did you know her wrists and ankles would not support heavy lifting even if we dressed her in a hardhat? Barbie’s body wouldn’t have the room it needs to hold all its vital organs or to have a baby.”

“That’s so sad,” my other daughter responded.

In the end, we felt compassion for Barbie and decided to replace her with a cloned sister. Barbie will continue reminding that us that each person is a one-of-a-kind masterpiece created to endure the grit of real life.

“For it was you who formed my inward parts; You knit me together in my mother’s womb. I praise you, for I am fearfully and wonderfully made. Wonderful are your works; that I know very well. My frame was not hidden from you, when I was being made in secret, intricately woven in the depths of the earth.” (Ps. 139: 13-15, NIV)