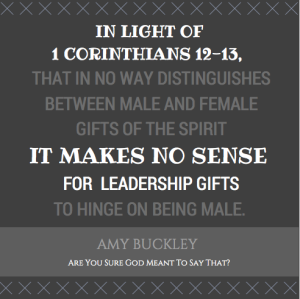 In response to Kevin DeYoung’s “Our Pro-Woman, Complementarian Jesus.”

Language matters—what we say, where we say it, to whom.

If, for example, a Victorian era Brit plans to knock someone up, he means to get a person out of bed. Listeners of his day would understand the popular phrase from a Sherlock Holmes novel. If a 21st century North American plans to knock someone up, however, he expresses less-than-honorable intentions toward a woman. Popular culture of our day affirms it endlessly through jokes, music, movies, and other channels.

Depending on the situation, it would be appropriate to say, “Thank you.” Or, it would make sense to take out a restraining order and install an extra bolt on the front door.

Context matters. I heard it all the time in seminary. It’s no small thing to translate biblical passages from Hebrew, Aramaic, or Greek into English. This requires getting into the minds of the biblical authors to figure out what they intended to say to specific people in certain situations of the day. Academics call the science of interpretation hermeneutics. The goal is to know what God meant to say about faith and practice within a certain context.

Those of us who read modern translations rely on interpretation of the text by translators. “Too often,” a seminary professor once said to me, “some scholars adjust materials to fit the mindset they have developed toward certain difficult passages of Paul.” And it reinforces a bias toward male privilege.

For example, some who interpret universal subordination of women to men in 1 Timothy 2:8-15 adjust other passages to their preconceived notions.

I believe this happens among some insisting that Jesus only had male disciples. True, he initially selected 12 men, probably because the surrounding culture perceived “the voice of a woman to be an invitation to lasciviousness.” And, a pious rabbi refused to discuss religious matters with a woman, even a wife. In fact, Jesus broke from social norms when accepting women as learners (Luke 10: 38-42). And a significant number of women traveled with him and took part in his ministry (Luke 8:1-3; Mark 15:40-41; Matt. 27:55-56).  God’s Word names specific women in conjunction with the twelve disciples:

Among them were Mary Magdalene, from whom he had cast out seven demons; Joanna, the wife of Chuza, Herod’s business manager; Susanna; and many others who were contributing from their own resources to support Jesus and his disciples.  (Luke 8:2-3)

They all met together and were constantly united in prayer, along with Mary the mother of Jesus, several other women, and the brothers of Jesus. (Act 1:14) 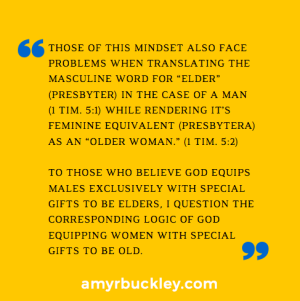 It’s notable too that women were the central witnesses to the birth, death, burial, and resurrection of Jesus. And he waited until the men left to appear to Mary and the other women (John 20:1-18; Matt. 28:9-10). Jesus commissioned them first to proclaim the most significant theological message—the Resurrection—to the men (Matt. 28:7-10; Mark 16:7; John 20:17).

Clearly problems arise when translating Jesus’ relationships with women through a filter that subordinates women to men, universally, in passages such as 1 Timothy 2:8-15.

Those of this mindset also face problems when translating the masculine word for “elder” (presbyter) in the case of a man (1 Tim. 5:1) while rendering it’s feminine equivalent (presbytera) as an “older woman.” (1 Tim. 5:2)

In light of 1 Corinthians 12-13, that in no way distinguishes male versus female gifts of the Spirit, it makes no sense for leadership gifts to hinge on being male. Paul’s meticulous attention to detail would surely have made that clear. Instead God expresses desire for all believers—men and women—to aspire to the greater gifts:

But earnestly desire the greater gifts. And I show you a still more excellent way. (1 Cor. 12:3)

It makes no sense.

A single post cannot unpack all the ways some translators wrongly interpret the subjection of women to men, for all time, in God’s word.