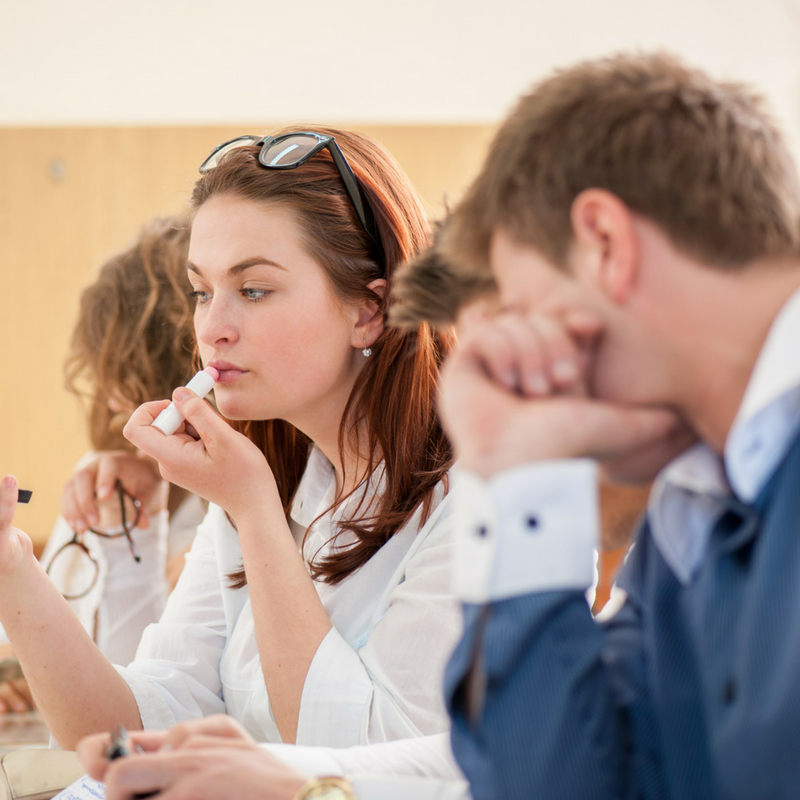 For a couple years in seminary, I didn’t wear lipstick. I twisted my long hair up tightly, wore dark turtlenecks and covered my eyes with glasses. I didn’t speak much in class unless I knew it counted toward my grade. In that case, I carefully planned what I’d say before opening my mouth. I didn’t want to call attention to myself in a room full of men. I hoped to fly beneath the proverbial radar, as a woman, and gain tools for teaching, writing, and ministry with as few conflicts possible.

I think my insecurities actually started on a playground a couple decades before that. I was tall and awkward and couldn’t throw or catch a ball to save my life. “She throws like a girl,” some boys snickered. I felt incensed and threw my body harder into tosses that only made the balls fly less efficiently. Yep,” they laughed, “she throws like a girl.” And I chastised myself for being like a girl.

Thankfully, my best friend M. was athletic. She invited me to her house for secret coaching. I developed better techniques with more efficient mechanics. Although I never excelled much at team sports, I became the third-to-last person picked in dodge ball! The boys stopped picking on me, and I felt relieved. On that playground, something rooted in me that I didn’t grapple with for many years—it seemed best not to be like a girl.

During seminary, I paid close attention to ways men acted in and outside the classroom. Playing by their rules helped me fit in. On the downside, some men seemed amused by my efforts. They called me “kiddo” and “honey” and “sweetheart.” I felt upset, like on the playground when throwing my body into inefficient tosses. And I guarded what I considered feminine-seeming parts of my personality—creativity, emotion, and relational ways of perceiving and acting. I got A-s but my soul was wilting.

Some men befriended me during that time. I appreciated when they recognized my abilities more than the color of my hair and style (or lack of). They invited me to join class projects and genuinely paid attention to my perspectives. It meant the world when my Greek partner asked the professor to assign us as partners the next semester (although schedules changed). I’m positive Jesus will someday compliment those men for including women: “Well done, good and faithful servants.”

Other men sized me up from my blonde hair to my snow boots: “Why are you in seminary?” They emphasized you the way boys on the playground had emphasized like a girl. That mortified me, and it took heaven’s help not to say the first words that jumped to mind: Don’t you know?! It’s the money, the sex and the power! Since I doubted they would think that was as ironic and funny as I did, I refrained. Smiling over my imagined answer, I gave my real answer: “I’m in seminary because I love God’s word and want to teach and write about it with integrity.”

Lunchtimes came with other challenges—I’d scan the cafeteria for an open seat beside a friendly colleague. Sometimes, the only one available was beside a young man who informed me of his pending engagement or marriage. Navigating the awkwardness, I’d offer congratulations and ask questions about his girlfriend, fiancé, or wife: “How did you meet? How wonderful!” Secretly, I wished a trap door would transport me to another universe where no man assumes a woman is fishing for a date, marriage, or an affair. Gathering my composure, I changed the subject: “Say, what did you think of the lecture on the post-Adamic covenants?”

A handful of women in the M. Div. program faced similar experiences. Once a male colleague told a female colleague she wasn’t “marriageable.” Another time somebody said that “women do ministry with a little-m” while “men do ministry with a Big-M.” That confounded us since Jesus first announced his identity—as Messiah—to a woman; and he commissioned her as the first missionary (John 4: 1-42). Then there was Paul who went around exhorting everybody to be one: “There is no longer Jew or Gentile, slave or free, male and female. For you are all one in Christ Jesus.” (Gal. 3:28 NLT)

For a class project, I once had to study a people group I disagreed with. So I spent a semester interviewing colleagues who believe men have divine authority over women. Likewise, they were studying people with my convictions—that the Spirit doesn’t limit authority based on gender. The assignment required setting aside preconceptions and judgments, asking thoughtful questions, and listening. I didn’t look forward to conversations with some who had largely ignored me and other women. I dreaded sharing my vulnerable experiences with them. Heaven knows I didn’t expect to be transformed by it.

Conversations were touch and go—tense, honest, even funny. When I listened—really listened—I heard the heartbeat of brothers who deeply loved Jesus and wanted to live by their convictions. They shared how they wrestled with certain difficult passages about women in ministry and marriage relationships. And they listened to how I wrestled with the same passages. We shook our heads realizing that we all read the same Bible yet reached opposite conclusions. It boiled down to differing methods of translating (hermeneutics). Although we were on opposing sides of a heated debate, it surprised me that we were having a decent time. None of us changed our minds, and we agreed we’d never do ministry together. We also agreed that it is never right to treat people unkindly because of theological differences. Peeking behind the curtain, I think we all became a little more human.

I realized how much I had stereotyped those men, expecting them to treat me like the boys on the playground. Fear and insecurity had caused me to build walls of protection that shut them out. They did care about women and valued their contributions to Christ’s body although their ministry framework wouldn’t work for someone like me. Knowing that we all loved Jesus, and had relationships with the Holy Spirit, I stopped worrying about their theology so much as caring about them as brothers. I can’t speak for them, but it seemed they gained some compassion for me too. In the end, I realized that we are all broken people on the same journey toward wholeness.  Someday, I think, Jesus won’t ask about our theology so much as, “How did you treat each other?”

One day, in a theology class, a friend tapped me on the shoulder, “I think you lost something. ” He pointed at a cylinder-shaped object rolling beneath my desk. Two years earlier it would have embarrassed me—A tube of lipstick had escaped from my bag, teetering on the edge of some stairs. I imagined it tumbling to the front of the room announcing: She’s a girl!

“Thanks,” I grabbed the container. Knowing he would get my joke, I casually put on lipstick.  “Now there’s something I can do that you can’t do!”  We laughed until it was time to start class.