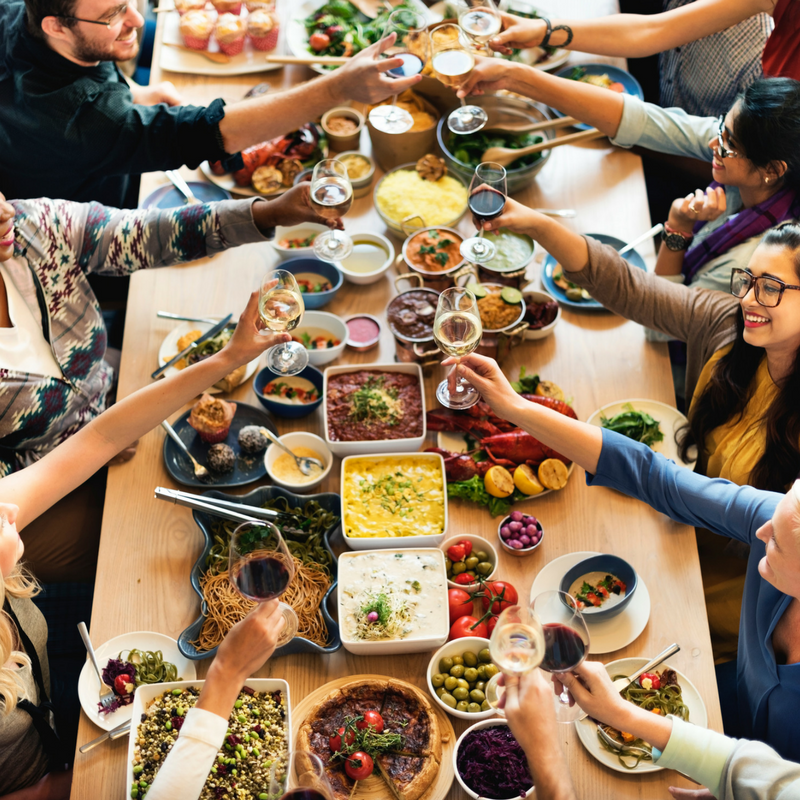 In my early twenties, I helped plant a church. At that point in my life, I’d never heard of biblical equality. All I knew was that men could lead men, women, and children, and women could lead women and children, but never men. I don’t recall anyone explicitly explaining those distinctions; it was just how things were. People stuck to their roles, and it didn’t occur to me to question that until I nearly fell off my folding chair one Sunday trying to repress inappropriate laughter.

That morning, the senior pastor made an announcement: “I’m pleased that someone is stepping up to the plate to lead us in worship.”

The announcement came after weeks of singing without a worship leader with the accompaniment of a woman seated at a keyboard in the corner of the room. Since she was positioned with her back to the congregation (so as not to direct men), the congregation had a hard time sticking together. Although the woman played her best, stanza lines overlapped and chorus endings echoed out of sync.

Prior to starting the church, the community had discussed who would contribute what, and it became apparent that not a single man had musical abilities; not one had ever led worship. Given the accepted view in our church that only men should lead “mixed worship,” I saw no reason to communicate that I regularly sang in weddings or that I had led worship in my high school youth group. It was decided that worship services would consist of singing to the indirect playing of the keyboardist (who faced a wall), or to recorded worship music when she was out of town (another source of my problem with inappropriate laughter).

The pastor continued: “Dave [name changed] is willing to lead us in worship, though he says he’s better at engineering than singing. Scripture invites us to ‘make a joyful noise to the Lord,’ and so let’s appreciate Dave’s efforts.”

When Dave opened his mouth, I struggled to control myself. Simply put, out-of-tune singing plus loudness equals hilarity. I did not mean to make light of the man’s efforts, or to disrespect him, but he could not hold a tune. “A Mighty Fortress is Our God” sounded a lot like a Saturday Night Live skit. I wasn’t proud of my tendency to see the situation that way, but I could not help being amused.

“He’s such a good leader,” a fellow congregant gushed after a service one morning.

Each time someone applauded Dave for enduring humiliation because “no other man would do it,” and because “women weren’t supposed to lead men in worship,” my stomach somersaulted. I couldn’t understand why it was honorable for a man who lacked musical abilities to lead worship.

And I wondered why on earth God would be offended by the worship of a woman with musical gifting, simply because she used that gift in front of men. What was the difference between singing in front of them in a congregational service and performing at a wedding or singing during the rest of the week? Why could women’s acts of worship bless men through cooking, cleaning a house, and rearing children, but not by leading them in worship on Sunday morning?

Didn’t out-of-tune singing distract from meaningful focus on God’s holiness? Wasn’t something wrong when congregants walked away from a worship service extolling a human (“He’s such a great leader”) more than the awesomeness of God? A fissure cracked apart as I began to question long-held assumptions about gender-based roles. 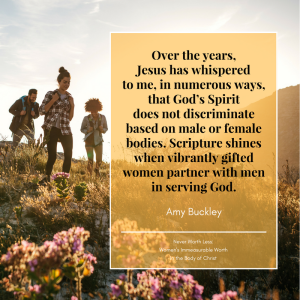 I’d been told my whole life that I was made in God’s image with equal value to males. But I quickly realized that I felt unworthy of receiving as good of gifts as men. I felt like the kid in A Christmas Story who stood in line to ask Santa for a Red Rider BB gun before receiving a boot in the face: “You’d shoot your eye out, kid.”

For as long as I could remember, I’d censored my natural abilities and gifts of the Spirit, avoiding territory [supposedly] off limits to women. A deep pain surfaced as I realized that I’d long felt that I was worth less than men in the kingdom of God.

Over the years, Jesus has whispered to me, in numerous ways, that God’s Spirit does not discriminate based on male or female bodies. Scripture shines when vibrantly gifted women partner with men in serving God. I’m indebted to professors, teachers, preachers, mentors, and friends who have helped me learn to embody Jesus as a woman.

I still feel pain over the ways that women are marginalized and unwelcome in many churches. But I also know that Jesus himself wasn’t always welcomed by religious organizations either.

A kind male reader recently offered healing words in response to an Arise article I wrote on sorting out my place as a woman in Christ’s body.

It hurts and saddens me that one who should have encouraged, supported, and nurtured your gifts instead threw the full weight of his authority into suppressing your talents and your message.

Speaking personally as a man, you keep right on doing what you do. Please, I need to hear from you. I don’t live in a society like Paul’s where I can transact all my ordinary business and never interact with a woman. I interact with women in every capacity all day every day—as supervisors, as subordinates, as grocers and bankers and doctors—and I require some exposure to a godly female perspective in order to make my way through a society like that in a way that is pleasing to God. I am thankful for you, and God bless you!

—Robert (Robert wrote a beautiful post on women in ministry on his own blog titled, “For God’s Sake: Let A Woman Preach.“)

I pray that more women receive such welcoming encouragement as they realize their immeasurable worth in the body of Christ.